GUEST BLOG: What Livvi’s Place means to one family with special needs

Today's guest blog is from the awesome Julie Jones, author of Have Wheelchair, Will Travel - a travel review site that chronicles the adventures of her family of four as they traipse all over the countryside and beyond. It's full of great information and helpful hints that will inspire you to get out there and amongst it.

There were certain things I always imagined I’d do with my children as they grew up.  One of the activities I took for granted as part of parenting, was going to the park.

When our son was diagnosed with Cerebral Palsy our world changed but our expectations didn’t.  Always positive we figured we’d find a way around what we call, “tricky situations”. Going to the park when our son was little was managed by sitting him on our lap to swing, carrying him up to the slide and getting him involved as much as possible.   As he grew, getting up the slide became more difficult and there was less he could do at the park.  By this stage we had our daughter.  Despite her being of an ideal age for the park, it became a place I hated because it was an environment that highlighted our son’s disability.  We always believed in living life positively and it was hard to do that at the park.  Our son had become an observer rather than a participant and we didn’t like that.

We avoided playgrounds for many years.  We then read about Livvi’s Place and decided to venture to the park again.  We had visited parks that were deemed ‘all abilities’ but didn’t find there was much to do if you were using a wheelchair.

We were blown away by Livvi’s Place at Timbrell Park. The ideas incorporated into the park were insightful and well thought out.  So many families were enjoying the park seemingly oblivious to exactly how fabulous the park was for anyone with special needs.  I felt like telling them but it occurred to me, not only would they think me loopy, but how wonderful it was that they just saw the park as a fun, ‘normal’ park.  We quietly revelled in the fact that it was so inclusive and were delighted that things were changing. 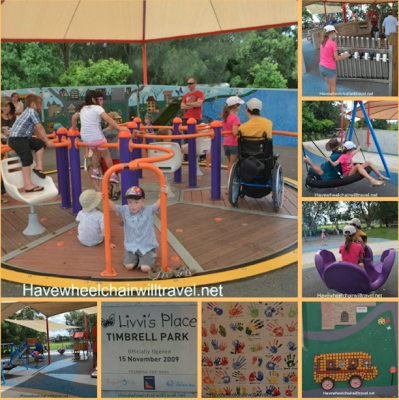 Our son rode the merry-go-round in his wheelchair and enjoyed being surrounded by other kids.  He waited with anticipation and excitement as the timer counted down to ‘go’.   He enjoyed the musical bells on the ground and many of the other features of the park.

Spurred on by our successful visit to Timbrell Park we decided to go to the Livvi’s playground at Yamble Reserve.  The park is close to the Cerebral Palsy Alliance where we spent many years doing therapy.  How I wish this was there years ago as a treat at the end of therapy or as a meeting place for our CP Alliance mothers group.   How wonderful for parents to now have this space to explore and enjoy. 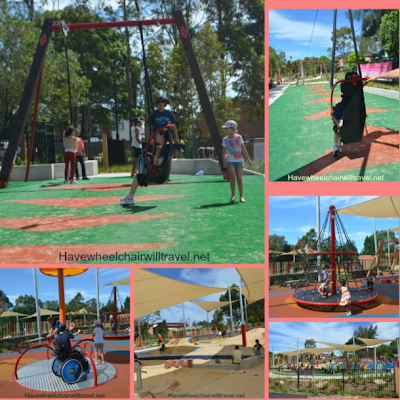 At Yamble Reserve our son did something he’d never been able to do before – a flying fox.  You cannot imagine the grin or the squeal of delight as he whizzed across in the flying fox seat with his sister enjoying the experience on the flying fox on the other side.

There is so much to learn from play and from playing side by side with your peers no matter their ability.  How wonderful to have a place to meet friends and family that is inclusive.  Socialising can often be difficult when you have a family member with a disability.  Ensuring they feel included in a day out is important and Livvi’s playgrounds make this possible.   Our son has spent so much time in therapy when other kids have been playing.  I just love for his opportunities to play to be successful.
Every suburb should have one of these parks because we can all learn a lot from being an inclusive society - AND just as importantly…………… it’s FUN!!
Posted by Unknown at 10:32 PM 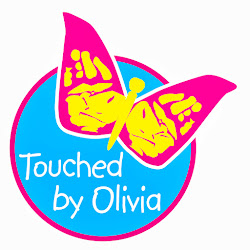 Where can you find out more?